Vacation accommodation in Rome and the Roman countryside

The town of Frascati near Rome in Italy

Frascati is located in the Alban Hills close to the ancient city of Tusculum, 20 km south-east of Rome, Italy. It is well-known for its homonymous wine, the light and refreshing quaffing white of every restaurant in Rome. However, Frascati is also an important historical and cultural centre, with cool mountain air in summer, and well worth a visit when you are in this part of Italy.

The most important archaeological find in the area is a Roman villa dating from the late Republican Age, probably belonging to one Lucullus. In the first century AD, the owner was Gaius Sallustius Crispus Passienus, who married Agrippina the Younger, mother of Nero. Later his properties were confiscated by the Flavian imperial dynasty (69 - 96 AD). Consul Flavius Clemens lived in the villa with his wife Domitilla during the rule of Domitian.

According to the Liber Pontificalis, in the 9 C Frascati was a small village, probably founded two centuries earlier. The name of the city probably comes from a typical local tradition of collecting firewood ("frasche" in Italian): many place-names around the town refer to trees or wood. After the destruction of Tusculum in 1191, the town population increased and the bishopric moved out from Tusculum to Frascati. Pope Innocent III endorsed the city as a feudal possession of the Basilica of San Giovanni in Laterano, but in the following centuries it was impoverished by frequent raids on its territory. It was a possession of various baronal families, including the Colonna, until, in 1460, Pope Pius II fortified the town with walls.

At the beginning of the 16 C, Pope Julius II gave Frascati as a feudal possession to the condottiero Marcantonio I Colonna, who lived there from 1508 together with his wife Lucrezia della Rovere (1485-1552). In 1515, Marcantonio Colonna gave to Frascati (as Populus antiquae civitas Tusculi) the "Statuti e Capituli del Castello di Frascati", the first city statute with rules and regulations to be observed.

In 1518 a hospice was built and named after St. Sebastiano, in memory of the old basilica destroyed in the 9 C. After Prince Colonna's death in 1522, Lucrezia della Rovere sold Frascati to Pier Luigi Farnese, nephew of Pope Paul III.

On 1 May 1527, a Landsknecht company, having participated in the sack of Rome, arrived among the neighbouring villages. However, the soldiers changed direction of march next to a niche consecrated to the Virgin Mary and the town was therefore saved. This event is commemorated by a church now called Capocroce. In 1538, the Pope Paul III conferred the title of "Civitas" to Frascati, with the name "TUSCULUM NOVUM". In 1598 construction began of a new cathedral dedicated to St. Peter. On September 15, 1616 the first public and free school in Europe was started up on the initiative of Saint Joseph Calasanz.
On 18 June 1656, some plaster peeled off the wall inside the Church of St. Mary in Vivario and an ancient fresco was revealed. It was the image of Saints Sebastian and Roch, protectors from the plague. In that year there was an epidemic of plague in Rome (anno dirae luis) but Frascati was spared, and from that year the two saints became co-patron saints of Frascati. There are statues of these saints in the facade of the Cathedral. In 1757, the Valle theater opened in the centre of the town and in 1761 the fortress changed to a princely palace under the patronage of the Cardinal Henry Stuart Duke of York. In 1809 Frascati was annexed to the French Empire and chosen as capital of the Roman canton.

In autumn 1837, there was a plague epidemic in Rome, and 5,000 people left Rome. Frascati was the only city that opened its doors to them. Since then Frascati's flag has been the same as Rome's, yellow and red. In 1840 the "Accademia Tuscolana" was founded in the city by Cardinal-Bishop Ludovico Micara and in 1856 the city was chosen as the terminus of the first railway (Rome and Frascati Rail Road) to be built by the Papal State. The last section of the railway line was inaugurated in 1884, 14 years after the city became part of the new Kingdom of Italy. On December 17, 1901 the first electricity reached Frascati from a hydroelectric plant in Tivoli.

On 8 September, 1943, Frascati was heavily bombed and approximately half of it was destroyed. Many people died in that air strike and in a second air strike on 22 January, 1944, the day of the battle of Anzio (Operation Shingle). The city was liberated from the German occupation on 4 June, 1944 by the US 85th Infantry Division.
Click the pictures for a larger view 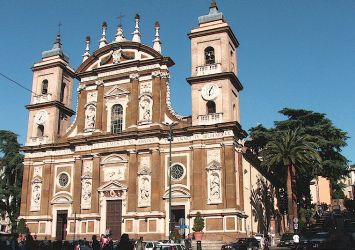 Basilica of Saint Peter the Apostle

The Cathedral (Basilica of St. Peter the Apostle) façade dates from 1698-1700 (Architect Gerolamo Fontana), while the interior is from the 16 C. The interior of the cathedral was destroyed by bombing in 1943 and remains bare. The sepulchral stone of Charles Edward Stuart may be seen on the inner side of the façade.

The Church of Gesù (16 C, 17 C) has niches with statues attributed to Pietro da Cortona
on the façade. The interior has an illusionistic false dome and architectural works by Andrea Pozzo.

The Bishop's Palace, the old "Rocca" (castle), is a massive construction with two square towers and one round tower. It is flanked by the small church of Santa Maria in Vivario, with a campanile (1305) characterised by three orders of three-mullioned windows.

Frascati is famous for the fine villas of the Roman nobility, built from the 16 C onwards by the Popes, cardinals and Roman aristocrats. In contrast to the Renaissance villas of Tuscany , these villas were contructed primarily for social purposes rather than primarily for farming. The "Ville Pontificie" have very particular relationship with the surrounding landscape. The villas are well-preserved on the whole, damage caused to some of them during World War II having been restored in a highly expert manner.

The principal villas near Frascati are:

Click here for more about the Villas of Frascati 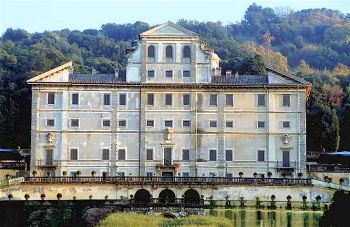 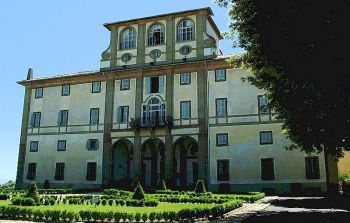 The Civic Archaeological Museum at the Scuderie Aldobrandini ("Aldobrandini Stables") diplays archaeological finds from ancient Tusculum and the nearby area. The scale models of the Tuscolane Villas are worth seeing.

Ethiopian Museum of Cardinal Guglielmo Massaia (1809-1889), a missionary who was buried here, in the Capucin friary, a "villa monastery" with a church dedicated to St. Francis of Assisi. This houses noteworthy works by Giulio Romano and Pomarancio.